Navigating a transition to renewable energy 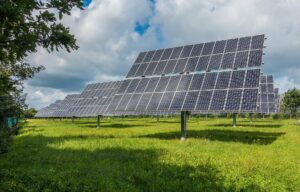 Tomorrow, I publish a new report, “Shifting Energy Infrastructure and Rural Minnesota,” which outlines the progress and barriers associated with a shift toward renewable energy. In conducting the research for this report, I heard many different perspectives on renewables, ranging from support for 100% green energy to a desire to continue investing in coal.

Generally, the people I interviewed agreed that a shift toward renewable energy is happening in the state of Minnesota, but there were concerns among many that there is not enough support for utility providers as this transition occurs. Nevertheless, the 2007 Next Generation Act requires utilities to achieve an 80% reduction in carbon emissions by 2050, adding urgency for utility providers that are struggling with this transition.

In a rural context, member-owned electric cooperatives face particularly strong barriers in developing renewables. From an inability to collect green-energy tax credits and build equity, to the contracts and long-term debt taken on to keep cooperatives afloat, the up-front cost of developing new infrastructure is hindering the implementation of this shift.

One area where interviewees were not in agreement was the cost of energy using renewables vs. coal. The cost of energy for households has already doubled in the last 20 years, and there are concerns from providers as to whether the transition toward renewables will help or hurt average utility rates. 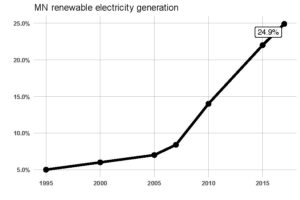 Others, such as Basin Electric Energy Cooperative, disagree. Basin Electric, which serves multiple states including Minnesota, generates more than 44% of its electricity from coal and is one of the top-five most carbon-intensive utilities in the United States. To leaders at Basin Electric, continued investments in coal make sense. Much of their existing debt comes from investments made decades ago in coal-fired operations and forms a major—and expensive—sunk cost for the co-op. A transition to renewables would require additional debt to finance construction on renewable infrastructure.