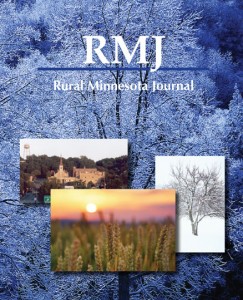 Why Everyone Should Care

It seems there’s a larger and larger disconnect between the Twin Cities and
rural Minnesota in terms the economy, politics, and just plain lifestyle.
Former Star Tribune writer Bob Franklin points out a few reasons he’s found over
the years why rural Minnesota shouldn’t be discounted.

Who Lives in Minnesota? The 2010 Census Shows Us How Our State is Changing

Benjamin Winchester, University of Minnesota Extension, Center for Community Vitality, Morris
The reams of data produced by the 2010 Census reveal just who is living in
rural Minnesota and the trends that will be continuing into the future.

Mary Quirk, K. Bull, E. Ellis & H. Thormodson, Minnesota Association for Volunteer Administration
How is the transition from the Greatest Generation to the Baby Boom to Generation X affecting volunteering in
Greater Minnesota? Some new research shows us.

Where Will Baby Boomers Live in Their Later Years?

LaRhae Knatterud, Minnesota Department of Human Services
Aging Baby Boomers may be the greatest demographic shift Minnesota and the United States have ever seen.
They also have tastes in living choices that are quite different from their parents. Will Minnesota communities
be prepared?

The Power of Invitation: The West Central Leadership Academy

Minnesota Philanthropy: Improving Quality of Life for All State Residents

Susan Stehling & Wendy C. Wehr, Minnesota Council on Foundations
As who lives in our rural communities changes, so too are the way these communities support themselves. As tax dollars shrink,
the philanthropy community is finding itself being asked to play a bigger role.

Kyle Uphoff, Minnesota Department of Employment and Economic Development
How are changing demographics affecting the economic heart of Greater Minnesota, its workforce?

The Reshaping of Pelican Rapids: How One Small Town Met the Challenge of Transformation

Joan Ellison
A region in transition? The city of Pelican Rapids in west central Minnesota is a microcosm of the change the state is going through
as a whole. One person who watched it all happen tells how the city rose to the challenge and embraced change.