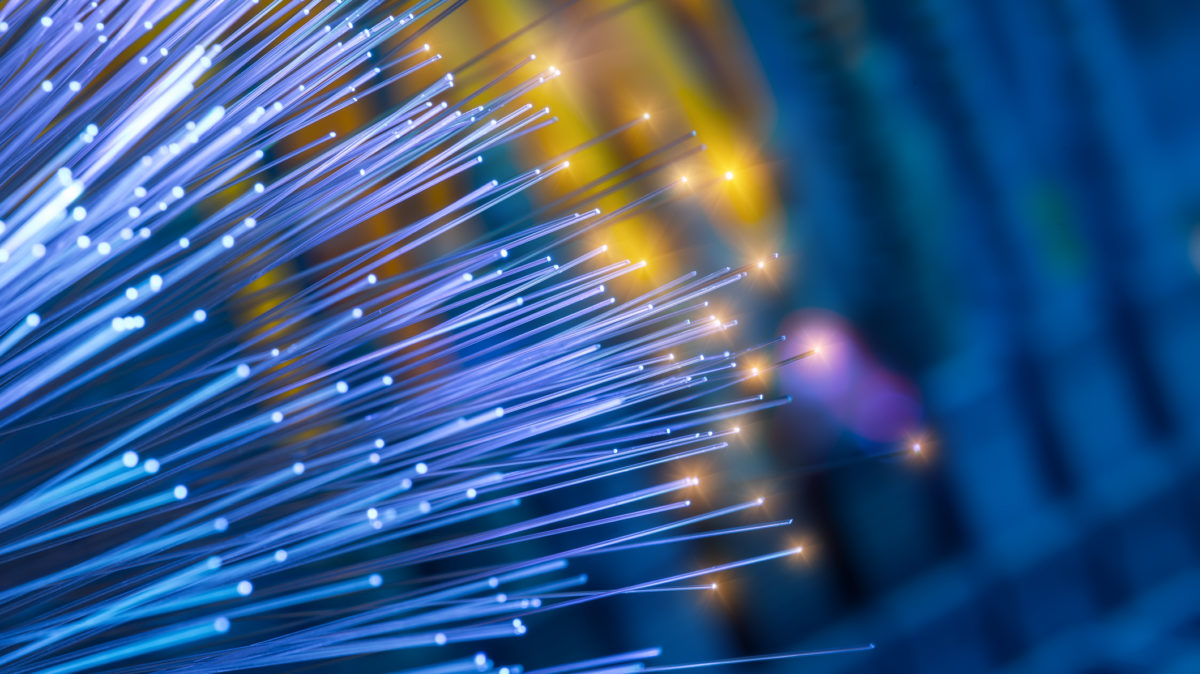 With public-private partnerships, Paul Bunyan Communications has been able to bring high-speed Internet to some of the most sparsely populated regions of northern Minnesota.

Northern Minnesota. Small towns and majestic scenery. Icons and industry. Farming and forests. This is Paul Bunyan country. Paul Bunyan Communication’s fiber optic network includes a region that stretches from the Headwaters of the Mississippi at Itasca State Park to Voyageur’s National Park near the Canadian border, from Leech Lake to Red Lake, from the world-famous statues of Paul Bunyan and Babe the Blue Ox to the Iron Range. The area also includes two Native American reservations, the Red Lake Band of Chippewa and Leech Lake Band of Ojibwe.

Paul Bunyan Rural Telephone Cooperative was established in 1952 by a group of rural farmers in the Kelliher and Laporte areas who simply wanted to get basic party line phone service. While telephone service was available in cities and towns, the big phone company of the day would not extend lines to their rural areas. So this group worked together to solve the problem themselves. They formed a telephone cooperative, contributed their own money and personal mortgages, and with the assistance of the federal government, they made it happen. These individuals took the risk to ensure their rural areas had access to critical communication services. They were not investing for financial gain, they were investing to ensure their rural areas could participate in the future of technology and all it offered.

High-quality broadband is important for all—rural Americans just as much as, if not more, than urban

Quite often you hear South Korea highlighted for the quality of their Internet access, but there is a catch to that comparison: South Korea is only about 38,000 square miles in size (a little larger than Indiana) and has a population density of 1,313 people per square mile. In Beltrami County, the home of Paul Bunyan Communications, the population density is seven people per square mile. This makes the economic and technical challenges of these two places very different.

While the densities are less, those seven people per square mile in this county need the Internet just as much as their urban counterparts. In fact, we would argue they need it more. 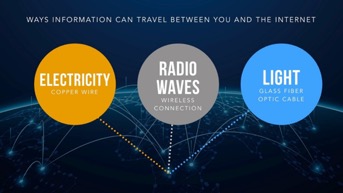 To understand the challenges of providing quality broadband Internet services, you must first understand the technology options available to provide it.

There are really three ways information can travel between you and the Internet: 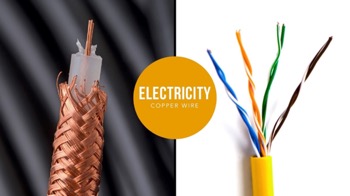 The two most common uses of copper wires in networks are for DSL from the telephone companies, which uses twisted pairs of copper wires, and coaxial cable networks typically used by cable companies. Both technologies have been around for decades and have served us well in getting us early solutions for Internet service.

Unfortunately, both copper technologies suffer from signal loss as well as speed and distance limitations. While the capabilities of copper—how much data you can squeeze onto it—continually improve, these limitations remain. At its core, copper technology dates back to 1876 when Alexander Graham Bell invented the telephone, and it was the only viable option for our cooperative to provide even the most basic high-speed Internet services until advances in both fiber optic and wireless technology were made in the early 2000s. 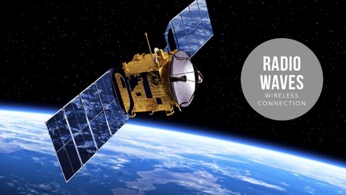 Satellite Internet, typically only used in rural areas where there are no practical wired options, can be slow and expensive. Satellites are 22,000 miles away, so speed—upload in particular—and responsiveness (latency) suffer.

The obvious wireless Internet that we all use is likely in your pocket or purse. Mobile Internet, using 3G, 4G, LTE, and coming in the next few years, 5G technologies, has revolutionized Internet access and introduced mobility, wonderful devices, and applications. 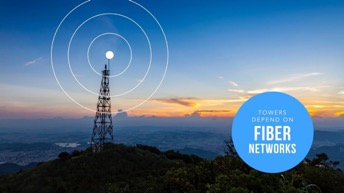 Keep in mind, however, that this type of wireless Internet is only wireless between your device and the nearest tower. From that point on, high-capacity services depend on fiber networks to connect the towers. Also, the distance that is actually wireless between you and the tower is going to be shrinking as new, faster transmissions demand higher frequencies that don’t travel as far. Speeds and capacity are also limited by the available radio spectrum, distance, and the number of users.

Like copper, wireless technologies are ever improving the amount of data that can be squeezed across radio signals. But it, too, ultimately suffers from capacity and speed limitations. 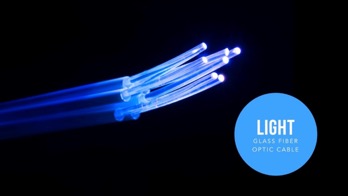 Fiber optic networks use strands of glass thinner than a human hair to transmit light across huge distances. And because the data travels as beams of light over glass instead of electricity across a copper wire, it can be transmitted exponentially faster, over far greater distances, more securely and reliably, using less power. The capacity of fiber is nearly limitless as different wavelengths—or colors—of light can be transmitted simultaneously on one strand of glass.

Fiber technologies are also uniquely capable of symmetric service, meaning your upload speeds can be every bit as fast as your download speeds – not typically the case for copper or wireless technologies. This is a major distinction. Downloading is consuming, but uploading is producing, and we need to empower producers with phenomenal upload speeds.

The decision for fiber

The determination to get basic phone service in the 1950s has transformed us into one of the most progressive communication cooperatives in the country. The philosophy the cooperative follows—working together to focus on service rather than profit, on shared values rather than share value—lends itself very well to issues where the economics are tough. In rural Minnesota, where population densities are low and network construction is expensive, that is how Paul Bunyan Communications keeps moving forward on broadband availability.

Based on the technology available in 2004, the cooperative decided that an investment in an all-fiber network was the best long-term choice for the cooperative. Fiber’s ability to deliver data faster and farther was the most economical path and one most beneficial to what matters most, the homes and businesses served. That is as true today as it was fourteen years ago.

Since then, we have built one of the largest rural all-fiber optic networks in the country through our own decisions and investments. There has been no mandate to update or expand our network, and prior to 2015 there were no grant programs to support rural broadband services. Like any other business, Paul Bunyan secured loans, which carried risk like any other loan.

Over the years, however, the cooperative has not gone it completely alone. A succession of programs designed to help communications companies provide service to rural areas have made our advanced networks of today possible. 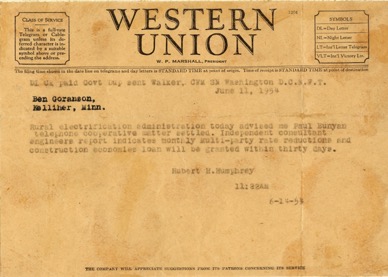 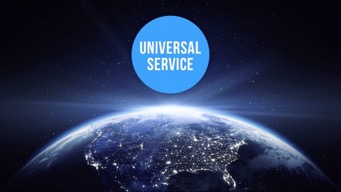 This long-established program has made it possible for those who serve high-cost, low-density regions like Paul Bunyan Communications to maintain their communications networks and continue to provide services at rates comparable to low-cost, high-density regions. It is vital to rural regions that this Universal Service Fund program continues and is properly funded.

Over its 75-year history, Paul Bunyan has seen consistent growth. Under the monopoly rules of telephone service in place through 1996, all of Paul Bunyan’s growth happened through the purchase of existing small neighboring telephone companies and by providing home and business services in addition to local phone service. The result in 1996 was a cooperative of just over 7,000 phone lines in service in an area of roughly 3,000 square miles of primarily rural markets.

The Federal Communications Act of 1996 deregulated local phone service, allowing for the cooperative to expand through construction rather than just acquisition. The demand for access to high-speed Internet service led Paul Bunyan to first expand through construction in 1999 to the Bemidji area, then in 2003 to Cohasset, in 2005 to the Grand Rapids area, in 2008 to Lake George/Itasca State Park and the Cass Lake area, in 2010 to Big Falls, rural Park Rapids including Two Inlets, Emmaville, and Dorset, along with the Trout Lake Township east of Grand Rapids, and lastly in 2014 to rural areas of Itasca and Hubbard counties, where expansion continues into 2018. All construction since 2004, both expansion and replacement of the existing copper network, has been done using all-fiber optic line to the premises. Today over 90% of cooperative members receive services directly through fiber.

What was primarily a landline party line phone network in 1952 is now one of the largest rural all-fiber optic networks in the country providing Gigabit high-speed Internet, high-definition television, business-class data services, and a lot more. The network is also made for future data-driven technologies that will be developed. All this in 5,000 square miles of beautiful northern Minnesota in dozens of rural townships, small towns, and two moderate-size cities, Bemidji and Grand Rapids.

The philosophy: Being a broadband enabler, not a gatekeeper

If you think about your Internet experience, whether it’s those early dial-up days or that rat’s nest of dusty cables behind your desktop computer or your Wi-Fi connection today, your Internet service provider has always been the throttle or choke point in your experience.

It’s only recently with gigabit speeds that Paul Bunyan Communications as a provider is no longer the bottleneck. Unless you have fairly new equipment, it’s very likely a gigabit Internet connection will be faster than your computer’s networking capabilities, your Wi-Fi can transmit, or that distant website can send the data back to you.

That’s how it should be.

Paul Bunyan Cooperative’s philosophy has been that customers should make the decision on what they need, what they can do, or what’s fast enough. Instead of being the gatekeepers, providers should strive to be the enablers of whatever can be dreamt up today or in the future.

Yet today, policy makers and ISPs alike still are deciding what speed is good enough, often setting the bar low for economic reasons and trying to use the existing—often copper wire—infrastructure or slow wireless technologies as a short-term solution.

Funding spent on existing aging infrastructure and old technology like copper results in no real progress in Internet speeds and capabilities and is a wasted opportunity to build for the future.

Our investments in infrastructure should be for the future, not on decades-old technologies. Our expectations for speed should be lofty, not what just gets us by for now. That means fiber optic networks delivering gigabit speeds and beyond.

We can do this today if there is the will. The dollars are there if we invest them in the right way, on the right technologies, and for the right reasons.

Let’s not just get by. Let’s think big. Let’s do what is possible, so that we enable those who follow to dream of what’s next.

Gary Johnson is CEO and general manager and in his 30th year with Paul Bunyan Communications in Bemidji, while Brian Bissonette is the marketing supervisor and in his 20th year there.