Fixing the child care shortage over the next few years will take boldness but also caution, along with an understanding that demography and economics make a difference.

But fortunately for us, we are the Center for Rural Policy and Development of Minnesota, and therefore we get to see this large state in all its infinite variety.

And there is a lot of variety. From Hallock, sitting on the vast prairie just south of the Canadian border, to Grand Portage at the tip of the Arrowhead, to Harmony in the southeastern woodsy driftless region to Worthington, Luverne and Pipestone on the rich croplands in the southwest, Minnesota is made up of many different regions. These regions vary not just by geography but by demography, economy, and yes, culture. Even the Twin Cities, as varied as it seems close up, has as a whole a demography, economy and culture all its own. Separate out the suburbs that ring the Twin Cities, and we’re talking many different regions.

The same but different

When it comes to governing a state this size, there are quite a few issues policy makers have to deal with that sound the same at first hearing—road funding, access to health care, education funding. But as with the different landscapes around the state, it turns out the ways that problems can manifest themselves may be very different from one part of the state to another as well.

Take child care for instance. The child care shortage is one of those issues that looks fairly homogeneous and straightforward on the surface: child care is in short supply everywhere in the state. The issue, as we have found from our own research, is that there are not enough child care providers offering enough capacity to accommodate all the children who may need care. It’s not uncommon anymore to hear stories of parents starting to contact providers as soon as they become pregnant only to be shut out, or to even plan their pregnancies around care availability. Low-income families and single-parent families, who are often the same unfortunately, have even fewer options. As we reported in 2016, the child care shortage in Minnesota is widespread and endemic. A recent survey by the Fairmont EDA found that 40% of workers responding had at some time turned down a job or withdrawn from the workforce because of child care issues.

But the devil, as usual, is in the details: even though the problem looks consistent across the state—a shortage of providers and therefore capacity—the solutions are not. The reason: various demographic and geographic forces have been at work over the decades to make the child care industry evolve differently in different parts of the state. This means even if the problem looks the same on the surface, the solutions will have to be different.

But first, let’s back up a little and cover some basics.

Looking at the data from the last twelve years or so, it’s apparent fairly quickly that the family child care providers are the ones leaving the business. In both Greater Minnesota and in the Twin Cities area, both the number of providers and capacity have dropped by more than 25% since 2006.

The number of centers and the number of spaces for children those centers offer has been increasing over the same time period, but here the similarity between Greater Minnesota and the Twin Cities ends. Between 2006 and 2017, spaces at centers in the seven-county metro area increased by more than 24,000, more than making up for the loss in 18,000 FCC spaces.

In Greater Minnesota, however, a loss of more than 22,000 FCC spaces during those years was offset by an increase of only 7,000 new center spaces. In other words, while the Twin Cities gained 6,000 child care spaces in that time period, Greater Minnesota lost more than 15,000.

What’s going on here? Why haven’t centers sprung up at the same rate in rural areas as they have in the Twin Cities?

To get to some answers, let’s look at three facts about child care in Minnesota.

Economies of scale. An immutable characteristic of rural areas is population density, or lack of it. Just as with broadband, where fewer customers per mile make the startup investment and overhead costs of providing broadband more difficult to recover, center child care with its greater overhead and startup costs compared to family child care is more difficult to start up and maintain in sparsely populated areas. With a smaller pool of children to draw from within a reasonable travel distance, centers will have a more difficult time attracting enough children to support the business. This explains why centers provide 70% of child care capacity in the Twin Cities seven-county area but only 35% in Greater Minnesota, even when cities like Rochester, Duluth, St. Cloud and Mankato are included. There are several counties, in fact, that have no centers at all.

Rates are suppressed because of lower incomes and sparser population. Checking the Child Care Aware’s annual survey of average weekly rates for child care by center or family provider and by age group, it’s apparent that rates have a definite tendency to be lower in more rural counties.  Although it could be attributed to lower cost of living, it’s more likely that on average, median household incomes are lower the more rural a community is, which in turn would lower a family’s willingness or ability to pay. This factor would hamper the sustainability of a child care operation with higher overhead costs compared to one with lower overhead costs.

Rates are not necessarily ruled by the local median income, however. When we compared median household incomes by county to average weekly child care rates, we found that Twin Cities families—on average—paid a larger percentage of their monthly income to child care than in rural areas. Hennepin County was the most expensive, where average child care expenses took up more than 25% of the median household income in 2016. However, the dense population of the area also gives providers a cushion. If one provider turns out to be too expensive for a family and that family leaves, another family that can afford the rate is likely waiting to get in. For this reason, urban and particularly suburban providers have more latitude in setting their rates at a level that allows them to make a profit. Providers in the rest of the state do not necessarily have that flexibility.

Pay is woefully low. And related to this issue of profits and rates is another important factor: staffing is extremely difficult for centers. Family providers occasionally take on regular assistants, but centers require staffing. The number of children a center can care for at any one time is established clearly in regulations. But pay for an average staff person at a center still hovers around $10-$12 an hour, a rate that creates a challenge for finding staff, especially in today’s climate of workforce shortages where workers can find too many better-paying alternatives.

These three points are important for policymakers to keep in mind as they craft solutions to the present problem because they show how the environment naturally shapes the long-term evolution of a service like child care and how those natural forces may interfere with policy.

The question, therefore, is this: How can the state have the most effective impact on the child care shortage across the entire state while minimizing unintended negative consequences?

It’s a conundrum, but it can be helped with better information.

The Center recently conducted a survey of both FCC and CCC providers in both urban and rural Minnesota. We’re analyzing the data now, and while the early results have given us few surprises, they have also provided some specifics: 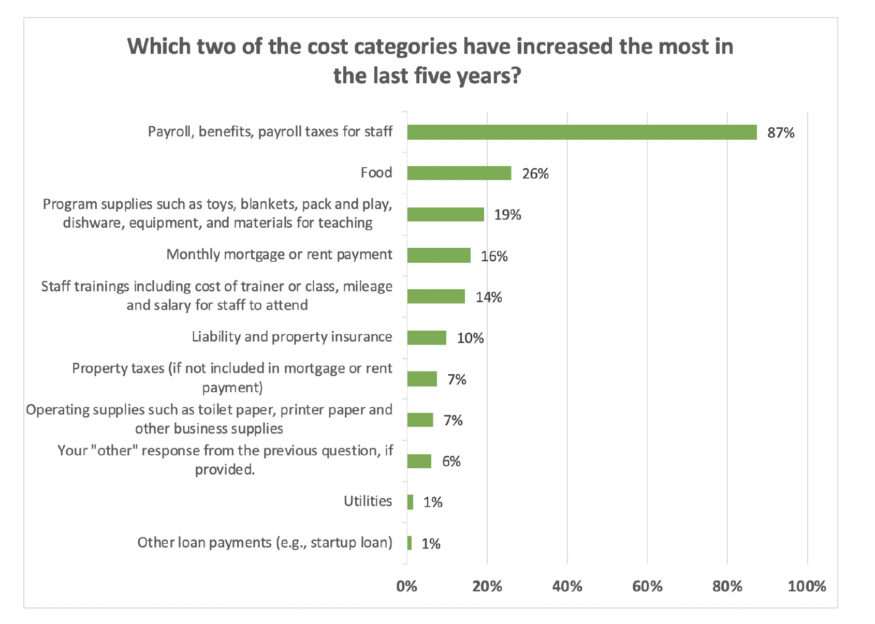 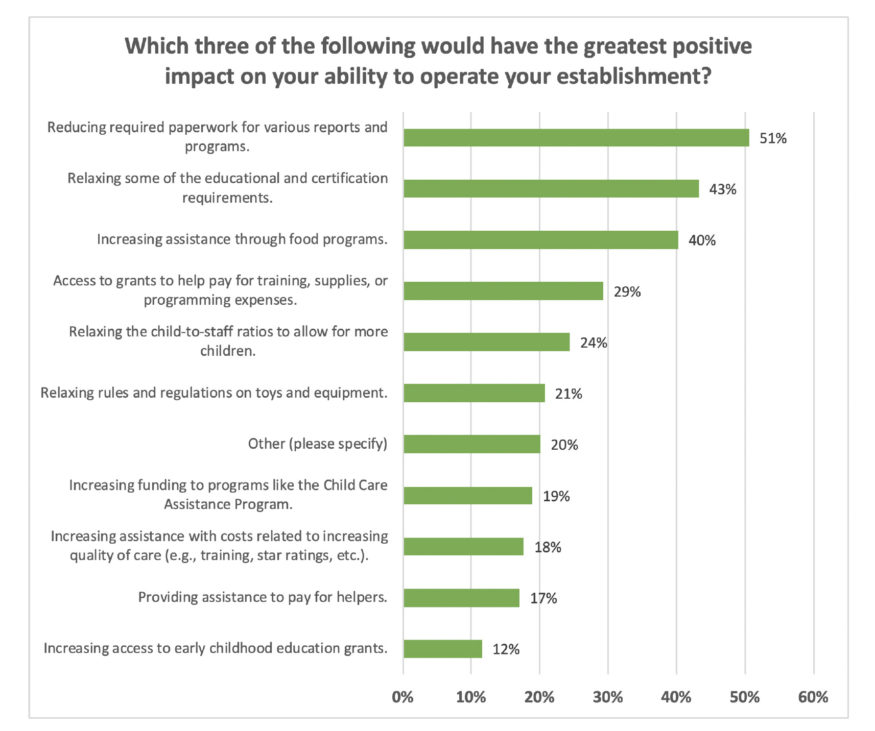 As we dig further into the data, we’ll get a better picture of the concerns of child care providers in both Greater Minnesota and the Twin Cities. In the meantime, we do know this about providing care in rural areas: Focusing on centers as a means of replacing family providers will be a tough go unless something can be done to lower startup and overhead costs while at the same time making pay more attractive.

But as we also explained above, hitting the problem with top-down solutions that are too specific or inflexible could just compound the problem, while not wanting to make a wrong move can cause paralysis.

Many leaders in many communities understand this and, rather than wait around, are going ahead and working on their own solutions. They are convening parents, local government, educators, churches, nonprofits and others to first identify what their community needs, then figuring out how to get there. In Benson, one solution has come through the school district, while in Harmony, a large employer in town, Harmony Inc., started its own child care center.

And we shouldn’t abandon the idea of growing the ranks of FCC providers. The chart below shows the number of FCC providers with active licenses at the end of 2018, grouped by what year they were first licensed. There’s a definite drop-off in the first few years, indicating that there are quite a few providers who start in the business but don’t stay in the business.

The fall-off could just be attrition as a certain number of women decide the business isn’t for them. What the chart might be showing, too, though, is the well-known pattern of new mothers starting a family child care business and staying in for just a few years, until their own babies are old enough to start school. Is there a potential solution here as well?

Essentially, the trick when it comes to solving the child care shortage across Minnesota will be this: Trying not to stifle innovation with good intentions. It will take a lot of work, but it should be possible for state-level policymakers to develop parameters for quality child care that allow communities to find solutions—whether for center or family child care—that work for them while maintaining the quality and safety we all desire.

Marnie Werner is vice president of research and operations for the Center for Rural Policy & Development.