Great growth in Greater Minnesota: A review of employment

Over the last ten years, Greater Minnesota’s economy has proven to be resilient and diversified, showing a strong recovery from the recession and steady job growth since. This growth, coupled with a population reaching retirement age, poses worker shortage problems for employers, but also ample opportunity for job seekers in the years to come.

By Cameron Macht, Minnesota Dept. of Employment and Economic Development

Though the Twin Cities metro area is the economic engine of the state of Minnesota, Greater Minnesota’s economy is also chugging right along. Through 2017, Greater Minnesota was home to 88,035 firms providing 1,120,865 jobs and $51.4 billion in total payroll, which means 40% of the state’s jobs and just over 52.5% of the state’s employer establishments are located in the 80 counties outside the seven-county Twin Cities metropolitan area.

Like the metro area, Greater Minnesota has seen employment ups and downs over the past decade, but the region ended 2017 with about 55,000 more jobs than it had in 2007, a steady 5.2% increase.

Table 1 tells the tale of job loss and recovery in each of the state’s regions before and after the recession. The 13-county Central planning region has the largest number of jobs outside the Twin Cities metro area and remained the fastest growing Greater Minnesota region over the past 10 years. Southeast is the second largest employing region and enjoyed the third fastest recovery since 2012. The 26-county Northwest planning region has added 10,625 jobs since 2012, making it the third largest overall and second fastest growing.

In contrast, Northeast Minnesota, which includes the seven counties in the Arrowhead region, has essentially broken even over the past decade, first losing about 3,900 jobs from 2007 to 2012, then regaining 4,500 jobs from 2012 to 2017. Finally, the 23 counties in Southwest Minnesota comprise the only region in the state that has not recovered all of the jobs lost during the recession, still falling about 550 jobs short of the region’s job total from 2007.

Health care and social assistance is the largest employing industry in Greater Minnesota, providing nearly 220,000 jobs across the 80-county region. Already accounting for one in every five jobs in Greater Minnesota, the sector is still adding jobs, gaining 11,665 jobs since 2012, a 5.6% increase. In 2017, the sector’s average annual wage of $50,728 was nearly $5,000 higher than the average for all industries combined, though wages varied greatly by sub-sector: hospitals and ambulatory health care services offered higher wages, while nursing and residential care facilities and social assistance providers tended to offer lower wages.

Retail trade is the third largest industry, with 131,478 jobs at 9,610 establishments—an increase of 4,140 jobs in the last half decade. The related accommodation and food services industry had 92,598 jobs at 5,701 establishments after gaining 6,590 jobs since 2012. However, wages are relatively low in both industries, likely due to the part-time and low-skill nature of many of these jobs, hovering between $16,000 and $26,000 annually. Combined, these two industry sectors account for 20% of jobs in the region, but just 10% of total payroll.

In sum, three out of every five jobs in Greater Minnesota are found in one of these five industries. Other significant industries in Greater Minnesota include public administration, construction, wholesale trade, administrative support and waste management services, transportation and warehousing, finance and insurance, professional and technical services, and other services.

As Greater Minnesota’s economy has continued to expand, it’s important to note how the diversity of Greater Minnesota’s economy has helped provide stability during the recession and the recovery (see Table 2). Out of 20 main industries, 16 added jobs between 2012 and 2017. In addition to the aforementioned gains in health care and social assistance, accommodation and food services, manufacturing, educational services, and retail trade, Greater Minnesota also experienced hiring surges in construction, professional and technical services, transportation and warehousing, public administration, administrative support and waste management services (which includes temporary staffing services), and finance and insurance. 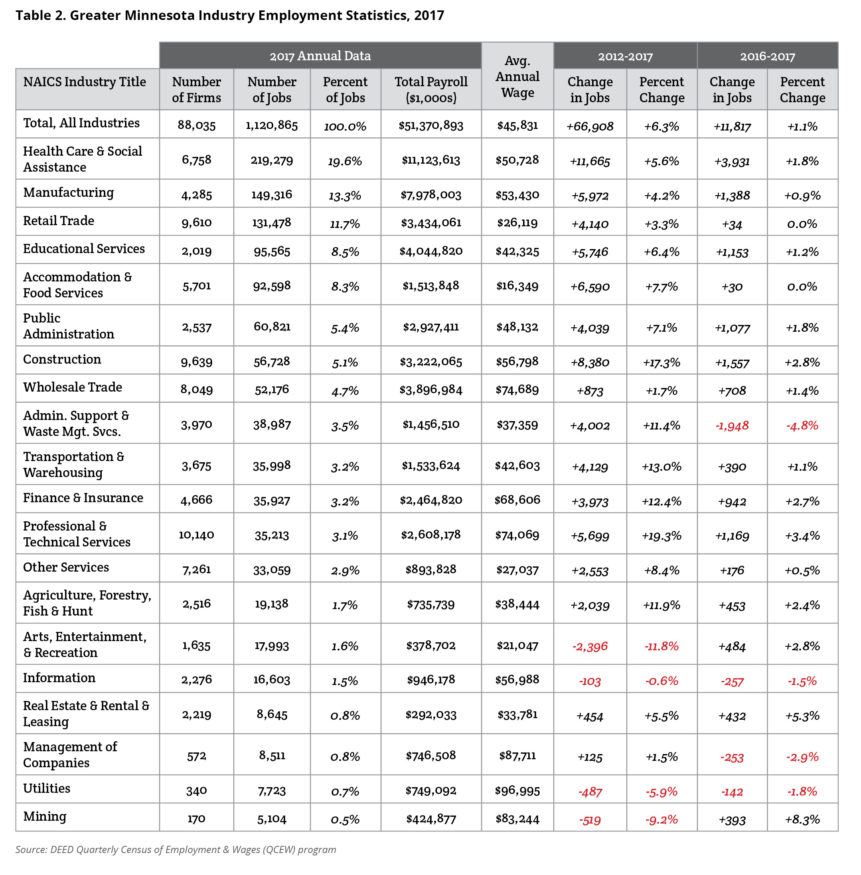 Though not fully reflected in DEED’s Quarterly Census of Employment and Wages data, it should be noted that agriculture is still an extremely important industry in the state. According to data from the U.S. Department of Agriculture’s Census of Agriculture, there were more than 70,000 farms in Greater Minnesota, producing a market value of products sold that exceeded $20.5 billion in 2012. Of those, about 40,000 people reported farming as their primary occupation. Even though that means only about 4% of Minnesota workers are still directly involved in agriculture, many more are employed in related industries that include manufacturing, transportation and warehousing, and wholesale and retail trade. 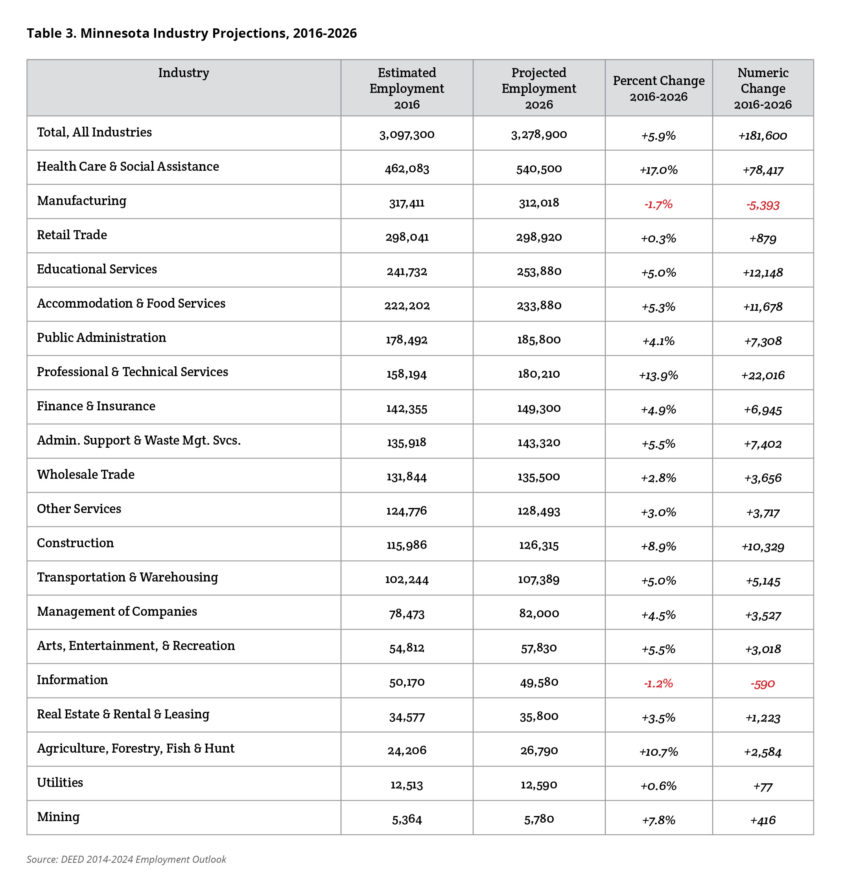 Minnesota’s economy is projected to grow 5.9% in the next decade, which would be a gain of 181,600 new jobs. Just over 60% of that growth can be expected to occur in the Twin Cities metro area, but that would still leave nearly 70,000 new jobs in Greater Minnesota.

Overall, the largest and fastest growing industry is expected to be health care and social assistance, which may expand another 17% statewide, or nearly 78,500 additional jobs. That would account for just over 43% of the state’s total projected job growth. Other industries that are expected to see significant growth include professional and technical services, educational services, accommodation and food services, and construction. In contrast, Minnesota is expected to see job declines in manufacturing and information, mostly due to industry changes and continuing automation (see Table 3).

Again, Central Minnesota is projected to be the largest and fastest growing region outside of the Twin Cities metro, followed by Southeast and Northwest, respectively. Growth rates are expected to be more muted in Northeast and Southwest, due to recent economic trends and on-going labor force constraints.

In addition to the new jobs created, employment projections also suggest there will be a much greater need for replacement hires – jobs that become available when the current worker retires, leaves the area, or otherwise changes occupations. On top of the 181,600 new jobs over the decade, the state is projected to have nearly 150,000 job exits each year and just over 195,000 transfers annually, meaning there will be constant demand for new workers to fill jobs.

Current data from DEED’s Job Vacancy Survey shows that jobs are already plentiful in Greater Minnesota and across all regions, creating high demand for workers in a tight labor market that is expected to remain tight in the future, especially given projected job growth. Industries and employers have realized the importance of recruitment and retention efforts, working hard to attract new workers to fill jobs that have been regained since the recession and will still be created in the future.

Cameron Macht is the Regional Analysis and Outreach Manager for the Minnesota Department of Employment and Economic Development.