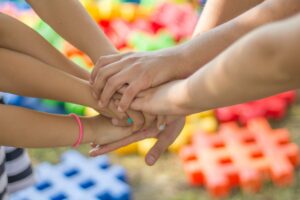 Last year, CRPD collaborated with students at the University of Minnesota’s Humphrey School of Public Affairs to publish “Building community, embracing difference: Immigrants, refugees, and local government outreach in rural Minnesota.” While this study established the need for equity and inclusion initiatives among rapidly diversifying meatpacking towns, it only brushed the surface of what growing racial and ethnic diversity means in rural Minnesota. As a result, we partnered with student researchers Ulises Linares, Zoe Martens, and Kerim Orsel on another capstone thesis this spring, which took a closer look at the barriers to childcare access for Latino immigrants in Worthington, MN.

Although Worthington has long served as a proxy to study growing rates of racial and ethnic diversity in rural Minnesota, almost none of the previous literature on rural childcare access takes BIPOC perspectives into account. The report, “Searching for “a Place that’s Accessible for All the People who Need It”: Child Care Access for Latino Immigrant Families in Nobles County,” subverted this trend by speaking with first-generation Latino families directly, and in the process gained better understanding into what makes childcare access a challenge for them.

The study consisted of 18 interviews with first generation Latino families, and various family childcare providers and officials in Nobles County, contributes an equity lens to the growing literature surrounding the rural childcare deficit. The city of Worthington was chosen as a focus because 32% of the population is foreign-born and 40% identifies as Latino. For comparison, the Twin Cities foreign-born and Latino populations average around 12% of total residents.

In speaking with immigrant families seeking childcare, providers who run childcare operations out of their homes, and Nobles County employees who oversee childcare availability, the team found several barriers to childcare access that applied to first-generation Latinos, including but not limited to:

While some of these barriers, such as the number of available childcare slots, effect all families outside of race, others like language and representation were specific to the immigrant community. In fact, the study found that the city of Worthington qualifies as a childcare desert overall. Although the rural communities that surround Worthington do not technically qualify as deserts, the cost-burden for anyone living in the area are two or three times the federal childcare affordability rate. And for first-generation Latino migrants, the percent of household income required to send their kids to daycare makes many mothers drop out of the workforce. Because immigrant and refugees tend to make less than white residents, on average, the staggering childcare costs keep many Latinos from seeking out formal childcare, utilizing informal networks like family and friends instead.

“In reality, we only found this person- it wasn’t choosing. It was the only option or you have to stop working and then there’s not enough money.”

– mother on her experience accessing care

The study also found that providers are often doing what they can to improve access, but are often constricted by the cost of providing care, and quota regulations which limit the size of certain age groups, namely infants:

– provider on how she tries to improve access for families, while balancing the financial sustainability of her business

For the full report, including methodology, findings, and policy implications, check out our website in the coming weeks. The study will be available among our research reports in June.