Behind the numbers: For high school students, awareness of career opportunities is important 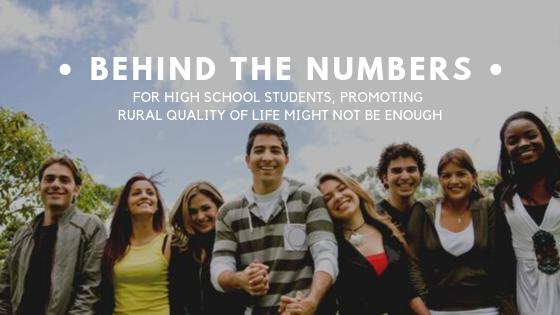 Ask high school students what they want to do after graduation, and they’ll probably have a pretty good idea. Asking them where they want to live, though, might not yield as clear an answer. They might even pin that location decision on where they can get the career they want.

That’s what we found in our recent report exploring what high school students think about future career opportunities in their home regions. We used student survey data gathered by the Minnesota Department of Employment and Economic Development last fall at a number of student career fairs in southern and western Minnesota. The survey asked students who or what influences them the most when it comes to education and careers decisions; where they would like to live in the future and what career field they want to work in; whether they think they can get a well-paying job where they live now; and why they are considering college, if they are. (For a full breakdown of each question, check out Luke Greiner’s summary here.)

The answers to each of the questions are fascinating enough, giving us a look into what students are expecting for their futures and especially who influences those expectations.

But just as interesting is exploring the relationships among those questions.

When we break it down by the primary source of advice, however, we can see that students involved in careers courses were far more likely to agree (94.4%). These are the students actively involved in programs where they can explore the careers in their communities, which indicates that being intentional with students by showing them available opportunities could have a significant impact on their perceptions and decisions.

For communities encouraging their young people to stay, though, an even more important relationship is looking at whether a student would rather work at a career they want or live in the area they want.

So, what does this tell us? Long before high school graduation, young people (in this case 10th-graders), are focusing on what they want to do in the future, but they’re much more flexible about where they’re going to live. That’s not unreasonable, given that many people don’t settle permanently until they’re adults. For rural areas trying to keep their young people around, however, promoting an area’s quality of life to high schoolers might not pay off that much later, since location isn’t high on their list of priorities. Promoting the careers they could have locally, however, could make a significant impression.

Especially for popular jobs that are also in high demand, like information technology and health sciences, making sure high schoolers know these jobs exist and are available locally could be just the ticket.